What is a Pneumatic Screwdriver?

The working principle of the air screwdriver tool is very simple. By pressing the air in the air compressor, it will drive the blade in the motor, and then bring the blade to drive the rotor, bring the rotor to drive the screwdriver, and bring the screwdriver to rotate the screw, thus loosen or tighten the screw and nut. Pneumatic screwdriver uses compressed air as power to operate, and some of them are equipped with devices for adjusting and limiting torque. It is composed of a pneumatic motor, a beating device or a deceleration device. Because of its fast speed, high efficiency and low temperature rise, it has become an indispensable tool in the assembly industry. 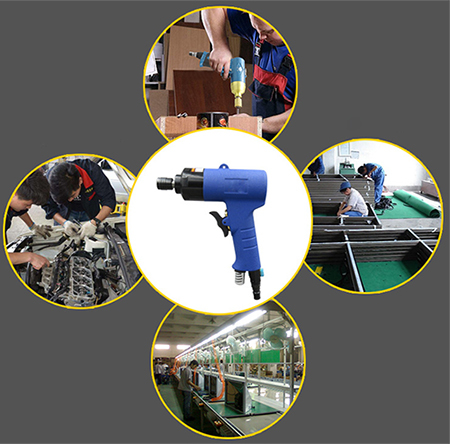 A semi-automatic hammer type pneumatic screwdriver is a screwdriver that will not auto brake after reaching the set torque. Usually the semi-automatic is designed as a hand-press type and a driving hammer is installed inside for screw locking. It is usually is simple in structure and durable, but without torque control. So it is usually used in occasions with large screws and less stringent torque requirements, such as motorcycles, automobiles, ships, and steel structures.

Fully automatic pneumatic screwdrivers pneumatic screwdriver is a screwdriver that can break running automatically after reaching the set torque are called. It is relatively complicated in structure, consisting of a motor, a clutch, a deceleration, and a closed air brake. It is usually used in occasions where small screws are used and tightening torque requirements are strict, such as electronic appliances, home appliances, etc.

To operate the start mode, you need to press the start lever, or press the plate button, etc with your finger.

Some pneumatic screwdrivers are equipped with a device for adjusting and limiting the torque, which is called a fully automatic adjustable torque type. Some do not have the above adjustment devices, but only adjust the size of the air intake to control the speed or torque using switch knob, which is called semi-automatic non-adjustable torque type.